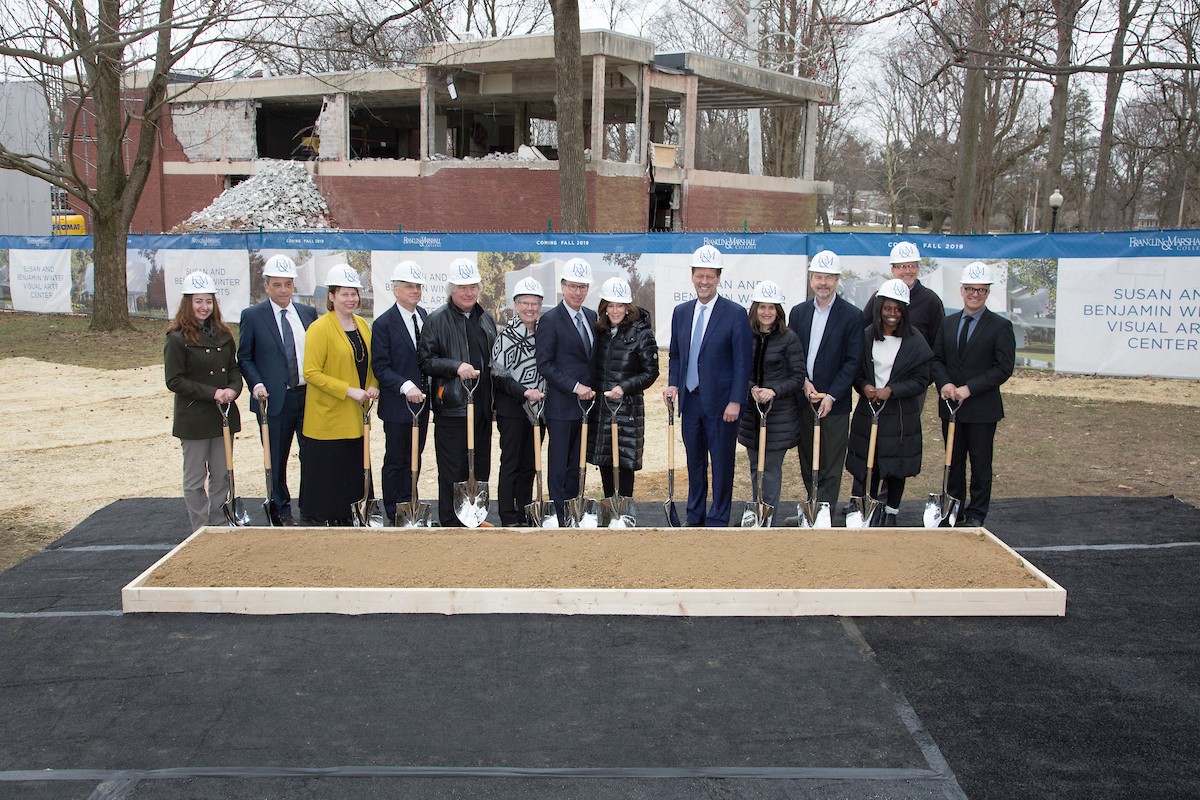 The new Winter Visual Arts Center will facilitate the creation of art and the study of visual culture in spaces designed to foster creativity. The Center will include a wide range of teaching studios, galleries managed by the Phillips Museum of Art, classrooms, student and faculty work spaces, space for digital and analog film production and editing, and an 84-seat cinema that doubles as lecture hall and performance space.

The site’s remarkable surrounding trees provided a central idea for the composition of the building, which Steven Holl calls a "pavilion on the park." Raised kite-like into the trees, the building’s light profile is a concave response to the large diameters of the campus’ trees—many over one-hundred years old and the oldest things on F&M’s historic 19th century campus. A prominent feature of the design is a glass-enclosed forum in the center of the ground floor that will allow pedestrians on the campus side of the building to see through to the green landscape of Buchanan Park. The new building will form part of a new Visual Arts Quad with a storm water reflecting pool at the south end of the campus marking a new college entry centered around the arts.

“The Winter Visual Arts Center will provide an inspiring resource for our students and faculty in Art & Art History and Film & Media Studies,” President Daniel R. Porterfield said. “In addition, it supports F&M’s talent strategy to recruit, educate and launch extraordinary student talent from every zip code in our country and around the globe. It also will transform the southern end of campus, connect the College and Buchanan Park, and support the City of Lancaster’s thriving arts culture.”

Funding for the $29 million Winter Visual Arts Center began with a $10 million commitment – the largest single gift from an alumnus in the College’s history – from Trustee Benjamin J. Winter ’67 and his wife, Susan, who also helped fund the initial exploratory phase in 2015.

“Susan and I want to help build on F&M’s visual arts excellence with a facility that provides the space and tools as designed by one of the world’s great architects, Steven Holl,” Ben Winter said. “This is an inspirational project for an institution that inspires students.”

The billowing suspended lightweight architecture of the new building is articulated with thin in wall trusses – like a box kite. The concrete walls at the ground level articulate the light and heavy distinction like the heavy trunks of the nearby trees. The skin is made of a new recycled glass aggregate material called “Poraver” with natural light to all studios provided by Okalux insulated channel glass and skylights. There are operable glass windows in every studio.

The state of the art geothermal heating and cooling of the new building, and its super-insulated envelope are part of the aspirations of a sample future architecture of near "net zero" energy. A large reflecting pool doubles as campus stormwater overflow. The reflections of the hovering building at night glowing in the water add to the special articulation of this place defining the new Arts Quad.

With the Winter Visual Arts Center, Steven Holl Architects currently has eight projects under construction, including the Rubenstein Commons at the Institute for Advance Study, which broke ground on March 14. The Institute for Contemporary Art at VCU will open on April 21 and the Glassell School of Art at the Museum of Fine Arts, Houston will open on May 20.