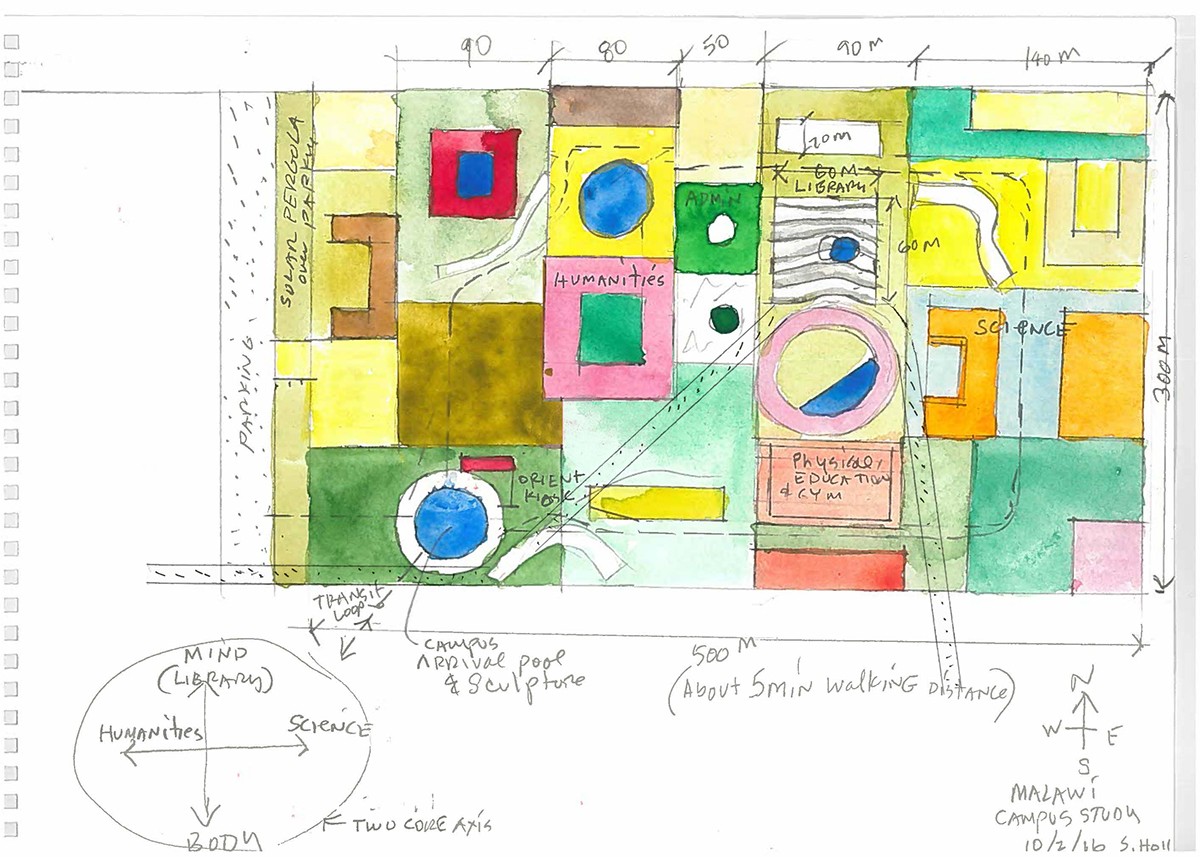 Steven Holl was interviewed by the Korean daily newspaper Chosun Ilbo when he visited Seoul earlier this month. Steven traveled to Seoul to give a lecture at Soongsil University and celebrate the opening of “Steven Holl: Making Architecture” in the University’s gallery.

Please visit Chosun's website for their interview in Korean. We have posted the English translation below.

“Morning Ritual Of Watercolor Painting Is The Beginning Of My Buildings”: Painting architect Steven Holl, the great architect and a AIA Gold Medal Winner

A project in Malawi with ecologically responsible design using photovoltaic is currently in progress.

“Uncomfortable you say? You name any pose. (With one of his legs raised) I can even stand like this for a long time!”

A 70 year old American architect, Steven Holl, a professor of architecture at Columbia University was constantly in agile move with his wits in front of the cameras at the exhibition,. Students who came to see him with their own eyes were laughing. It was completely different than when he politely told with dignity just a minute ago in the performance hall next door, “I would like to listen to this violin bit more and let’s do an interview afterward.” He literally proved how he lives by his words, “I don’t have any constrains. My imagination is free as a bird without any limitations.”

He is a starchitect chosen as the America’s Best Architect by Time Magazine in 2001. Also, Holl is a recipient of the AIA Gold Medal in 2012, the most prestigious award given by America Institute of Architecture, AIA.  He also is a master of phenomenological architecture making ‘the complete experience of architecture’. Some of many acclaimed works are MIT Simmons Hall in United Sates, Kiasma Museum of Contemporary Art in Finland and Daeyang Gallery and House in Seongbuk-gu, Seoul.

His recent visit to Korea is related to one of his projects, a master plan and major buildings design within Daeyang University in Malawi commissioned by Miracle for Africa Foundation established by Mr. Chung, Yookuen, a Chairman of Daeyang Shipping co ltd. This exhibition and a lecture took place in line with the ground breaking of the central library of Daeyang University.

Steven Holl designed the library size of 6600sq.m. with unique roofs shaped like waves. He explained the wave like shape “brings the maximum sunlight while providing photovoltaic generated electricity to power the building. 20% of the PV generated electricity from curved roof sufficiently powers the library at net zero and remaining 80% will power the rest of the campus. The curvature of the roof brings sunlight into the building as well as it provides the shade from harsh sunlight.” He added, “library design is optimized for the local climate of Malawi with its highest temperature of 35°C and the lowest of 22°C at the altitude of 1250m with energy shortage issues.”

The concept of the campus masterplan is ‘science and humanities’. He told, “I designed with a key concept of balancing science and humanities unlike some other universities emphasizing only technology and engineering.” Also, Malawi traditional textile art, a form of balance between science and humanities was also a source of inspiration. In the middle of and the central library, there is a reflecting pond, elements you can find often in his works. He told, “It is to give you miraculous experience. Water reflects and refracts light just like lens. The color and shape of flowers and trees reflected on the pond have an intense psychological impact on people.”

He is known as ‘painting architect’.  He went into architecture with his heart set to be a painter, which then he decided to be an architect. Until now, initial sketch watercolor of his building on a small sketch pad is one of his trademarks. He told, “I begin my day with an hour of painting watercolors. Sometimes I will paint something more seriously or I draw out my imagination with a cup of green tea in the early morning. Sometimes, it is an impulsive and ambiguous watercolor which nonetheless becomes a key concept idea for a building. Sketching and painting are my natural language and medium in expressing my ideas and the beginning point of any design.”